Monasteries of Haghpat and Sanahin, Armenia 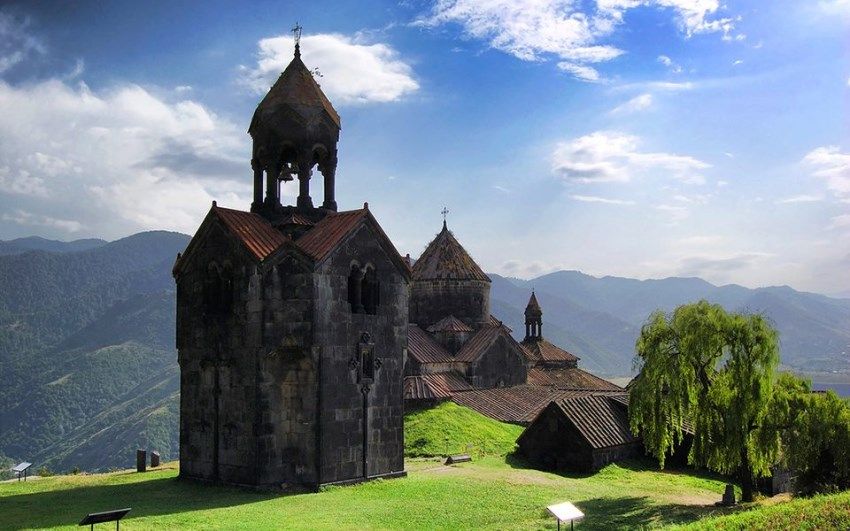 These two Byzantine monasteries in the Tumanian region from the period of prosperity during the Kiurikian dynasty (10th to 13th century) were important centres of learning. Sanahin was renown for its school of illuminators and calligraphers. The two monastic complexes represent the highest flowering of Armenian religious architecture, whose unique style developed from a blending of elements of Byzantine ecclesiastical architecture and the traditional vernacular architecture of the Caucasian region 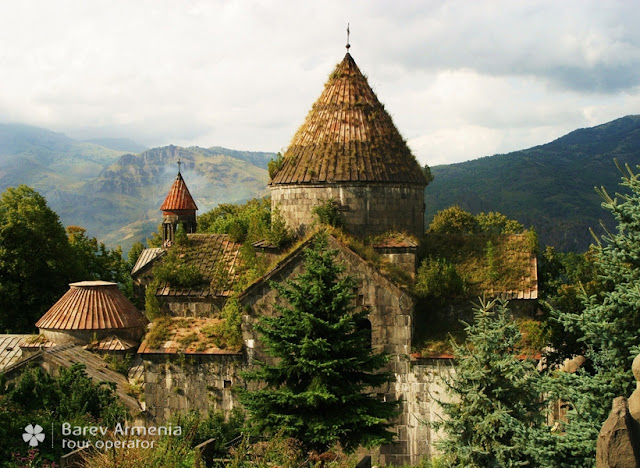 Brief synthesis
The two monastic complexes of Haghpat and Sanahin are a serial property situated in the Lori Marz (region) of Armenia. Dating to the 10th to 13th centuries, the functional role, location and stylistic characteristics were taken into consideration during the construction of each new building. As a result, an asymmetrical but volumetrically balanced, harmonious and integrated complex was built, one which is in harmony with the picturesque landscape. The two monasteries represent the highest flowering of Armenian religious architecture between the 10th and 13th centuries. This unique style developed from a blending of elements of Byzantine ecclesiastical architecture and the traditional vernacular architecture of the Caucasus. 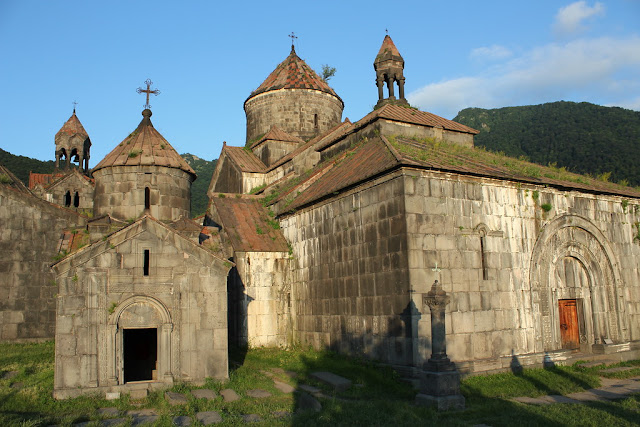 The monastery of Haghpat, founded by Queen Khosrovanush (wife of the Armenian King Ashot III the Merciful) in AD 976, consists of one narthex, two corridor-sepulchers, a refectory, a scriptorium, the Chapel of Hamazasp, a belfry, several chapel-tombs and cross-stones (khachkars), all surrounded by a towered rampart. The approaches to it were observed from the Kayanberd Fortress, which was built in the 13th century especially for that purpose.
St Nshan Church is the oldest monument in the complex and was built between AD 976 and 991 (architect Trdat). The church is a rectangular domed construction, slightly elongated from east to west, with an internal cross-shaped plan. The central dome rests on four massive pillars in the side walls. Distinguished by its integrated interior and vast dominating dome, the church is a complete and brilliant example of new stylistic trend of Armenian architecture in the 10th and 11th centuries. The earliest layer of the frescos in the main apse has survived, with its main composition of Jesus enthroned. Scenes of the annunciation, birth and baptism were painted on the lower part. 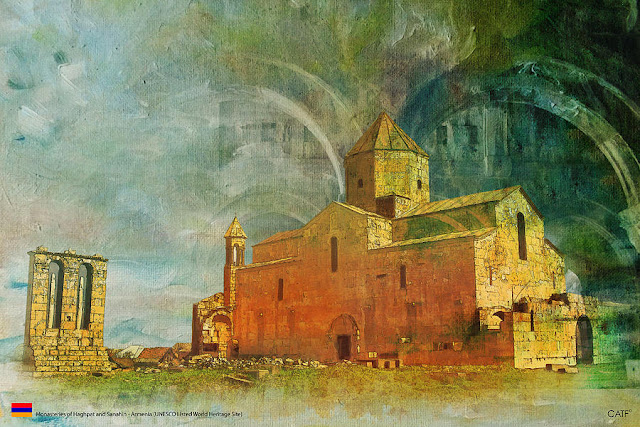 The bas-reliefs of the kings Smbat and Gourgen, standing in front of each other and holding a model of the church and located on the upper part of the eastern façade, are brilliant examples of sculpture.
The church is abutted to the west by the narthex, with an interesting internal composition, added in the second decade of the 13th century by the Princess Mariam. The narthex is an exceptional example of Armenian medieval architecture. The crossing arches supported by two columns carry the roof-vault, illuminating the interior of the building. 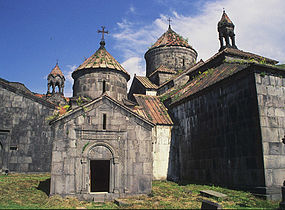 Built in AD 1257, to the north of the main church, Abbot Hamazasp’s building has a square plan and a vaulted roof supported by four central columns, with a hole in the roof to allow smoke to escape and light to enter. It is the largest example of this building type in the complex. A small vaulted church adjoins the narthex on the east, while the scriptorium (11th century AD) is attached to the southern part of the eastern wall and was fundamentally reconstructed in the 13th century.
The space between St Nshan Church, Abbot Hamazasp’s building and the scriptorium was vaulted over when it was transformed into a burial vault in the 13th century. It is continued by a second corridor-shaped sepulcher along the eastern side of the church. 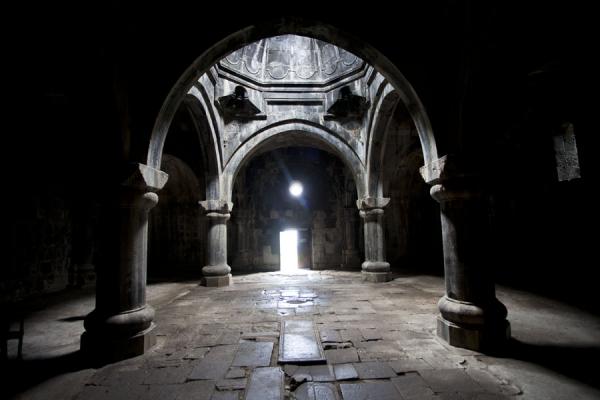 The belfry, built in AD 1245 in the eastern part of the complex, is the earliest example of such constructions and is singled out by its unprecedented volumetric-spatial solutions with its cross-shaped ground-floor plan supporting an octahedral second floor, surmounted by a seven-columned bell-tower.
The refectory (13th century) has its own exceptional place amongst Armenian medieval secular constructions – the rectangular space is divided into two identical halls, with a system of intersecting arches and octagonal roof for illumination and evacuating smoke. 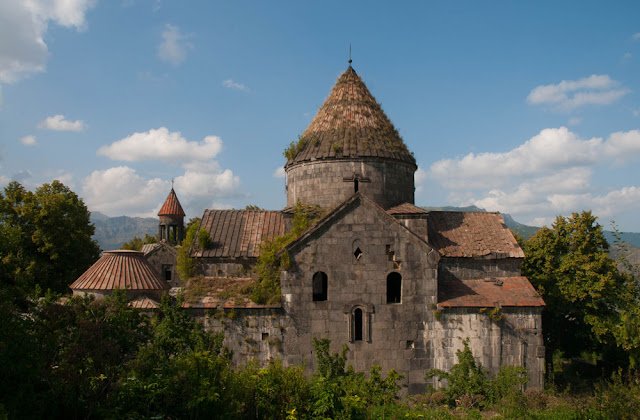 Numerous monuments of memorial and monumental art are preserved in the monastery. The Amenaprkich (Redeemer) khachkar (cross-stone) (AD 1273) is located at the northern entrance of St Nshan Church.
Sanahin used to be the administrative centre and family burial place of the Kyurikyan Bagratids (10th and 11th centuries), as well as the Episcopal residence for the diocese (until the 11th century).
The Sanahin monastery contains St Astvatsatsin (Holy Mother of God), St Amenaprkich (Redeemer) and St Grigor Churches, narthexes, fore-church, scriptorium, belfry and academy. St Astvatsatsin Church (AD 928-944) is a central-domed, cross-shaped example of Armenian medieval classical architecture that reached to its perfection in the main building of the complex – St Amenaprkich Church. It was built between AD 957 and 966 under the patronage of Queen Khosrovanush (wife of King Ashot III the Merciful). The focus of the interior is on the central nucleus and the harmony between its square base and round dome. The main apse is surrounded by four two-storey sacristies. The church is approached through a narthex, built in AD 1181 in a cross-in-square plan with the roof supported by four columns (the earliest known example of this plan). The ornamentation of the capitals of the columns with symbolic sculptures in the shape of animal heads adds distinctive expression to this narthex. 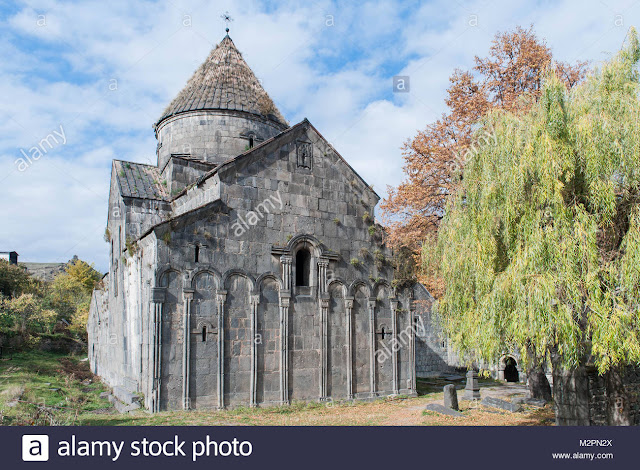 The narthex of St Astvatsatsin Church (built in AD 1211) is unique in its plan of a three-nave rectangular hall.
The scriptorium (also called relic house) is located on the northeastern side of the group of buildings. It was built in AD 1063; it is square in plan and vaulted, with niches in which codices and books were stored.
St Grigor Church dates to AD 1061. Its façades are notable for their smooth decorative arcatures and triangular niches. 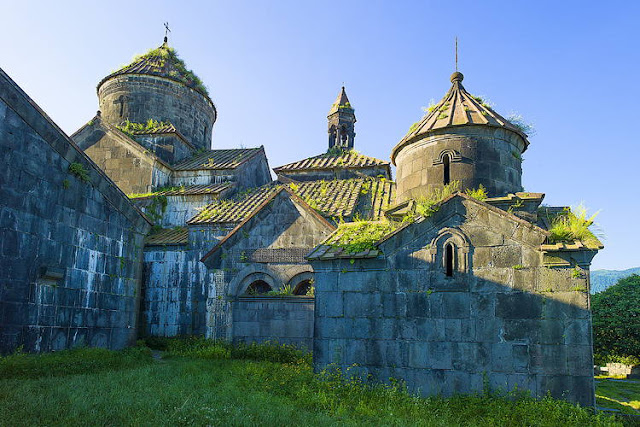 The belfry (one of the oldest in Armenia) was built between AD 1211 and 1235 next to the forechurch from the northern wall. The three-storey construction is crowned with columns and a rotunda. Its roof is supported by two pairs of intersecting arches. Its western façade is distinguished by its decorative ornamentation. 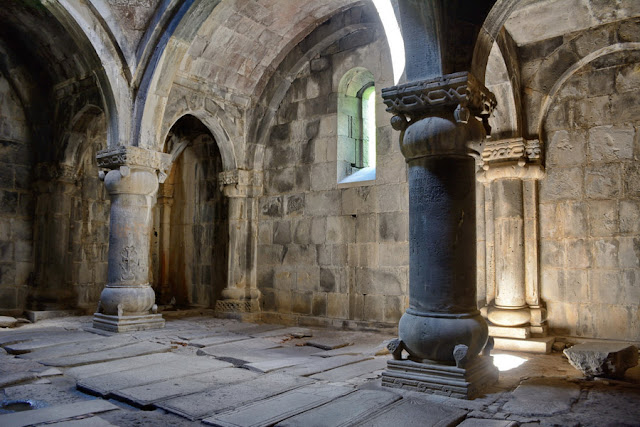 St Harutyun Church (first quarter of the 13th century) and the ruins of St Hakob Church (second half of the 10th century) lie outside the monastery’s boundaries. There are two springs in Sanahin: the first one is located in the former centre of the village (with a well-house from the end of the 12th century – beginning of the 13th century, in the form of a vaulted hall with a double-arched opening), and the second one is adjacent to the northern defensive wall with a well-house built in 1831, with one arched opening. 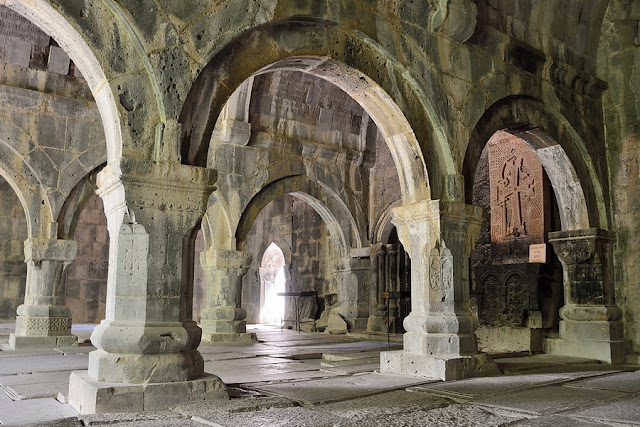 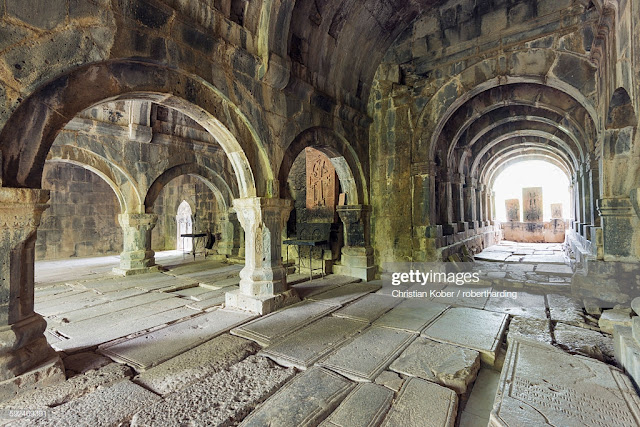 Criterion (ii): The monasteries of Sanahin and Haghpat are unique by virtue of their blending of elements of both Byzantine church architecture and traditional vernacular building styles of this region.
Criterion (iv): The monasteries of Sanahin and Haghpat are outstanding examples of the ecclesiastical architecture that developed in Armenia from the 10th to the 13th century.
Integrity
The property contains the whole of each of the two monasteries which are its constituent parts. Its buildings and other attributes are sufficiently intact to convey its Outstanding Universal Value.
Its location in an active seismic and industrial zone, the pollution of the surrounding environment, as well as being on an active tourism route, are the main threats to the integrity of the site.
Authenticity
The constructions included in this property, as well as its landscape, have not been modified since inscription on the World Heritage List. Their authenticity has not been threatened in spite of damage and restorations carried out over time.
The monasteries illustrate, in their structure and current state, the organic growth of monastic establishments over many centuries, with successive additions and reconstructions necessitated by destruction and deterioration.
Protection and management requirements
The property is under the ownership of Armenian Apostolic Holy Church as well as being protected by the Law “On protection and usage of the historical and cultural immovable monuments and historical environment” of the Republic of Armenia, and by the regulation “On State registration, study, protection, fortification, restoration, reconstruction and usage of the historical and cultural immovable monuments”. Additional articles exist in the Civil, Administrative, Land, and Criminal Codes of the Republic of Armenia for the protection of the monuments.
The Ministry of Culture of Armenia, with its specialized units as authorized republican bodies, and the Armenian Apostolic Holy Church with its specialized units and diocese as owner, as well as non-governmental, nature protection units and people interested in Armenian heritage conservation, are engaged in the protection of monastery complex.
The issues concerning conservation, rehabilitation and use of the sites are discussed at the specialized councils formed by the Ministry of Culture of Armenia (methodological, architectural councils) and Mother See of Holy Echmiatsin, where the representatives of both sides are equally represented.
The Government of the Republic of Armenia enforces a consistent policy to study comprehensively the technical condition of the component parts of the property. The Agency for the Protection of the Historical and Cultural Monuments of the Republic of Armenia is responsible for the maintenance and protection of the buffer zone on behalf of the national government. The budget of the property is formed of the allocations from the State budget, entrepreneur activities and private donations.
To meet threats such as seismic activity, industrial pollution, development outside the property, the pressures of tourism, and decay, over time scientific-research, renovation, fortification, design and preventive measures have been undertaken in order to maintain the authenticity. In 2012, the rehabilitation process of Sanahin monastery was launched and preparatory measures initiated in order to meet the necessary requirements.
SD